I finally finished one of my own projects. Last January my DH bought me a tablet. The problem with that was the current purse was to small. So I had to make a larger one. To bad all my problems couldn't be solved that easy, lol. It took me about 5 months but it is done. 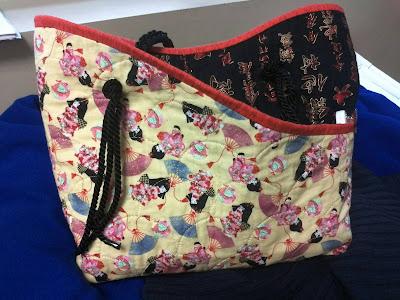 Update: the purse patterns is modified from the 'Quilt' magazine I believe the Feb 2012 issue.

That is what it feels like. Starting over with new ideals for old projects. I finally got to clean up my sewing room again. It seems to be a 6 month chore. I will sew for deadlines and have everything a mess and can't find anything and it will get so fustrating that I can't sew any more. I moved the tables around, hopefully this will be the magic arrangement. I've tried every other way and it still got a mess. The real solution is to get my projects done and out of the sewing room. I found projects that are over 25 years old, mostly cross stitch, but I still want to finish. I think the best way is to just pick up a project and start working on it till it gets finished and then to the next one. Last week I finished the last project that I did for someone else. It was a t-shirt quilt for a co-workers daughter's gradution. It turned out great, but forgot to get pictures. I think it was the one project that has cured me of saying yes, till at least for a few months.
I think the first project will be a quilt that I started last year, its for my king size bed. I will show pictures of it when I get it up on the design wall, Right now it's in a tote bag, so I have to figure out where I left off on it.
In the mean time I still have some organizing to do in the sewing room, so that should take me most of this week. Till later
Cheryl M.
Posted by Cheryl M. at 8:49 AM No comments: