Getting back into things again and again!!


Though I read several blogs everyday, I just don't seem to have anything to say on my own blog that would be interesting, at least to me. I have been busy with the guilds and groups that I belong to. Though I love doing all the things with and for the groups, I think I have to slow down after this year is over. Being president of the guild and helping with the organization of a large quilt show in the area is putting the stress level in over drive. I say this now, but when asked to do something or want to do something comes up again, I most likely will be in the midst of it.
One of the guilds that I belong to is starting a UFO challenge in June. To qualify for a UFO one block has to be started for the project. Well I have been wanting to start a small wool project by primitive gatherings, its' called little buds. So I started one block. The leaves are about 1/2" by 1/4" small and I am using 50wt sewing thread. So far it's not to bad. 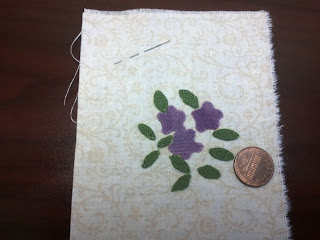 You can see from the picture how small the leaves are compared to the penny.


Just take one stitch at a time and hopefully I will have it done before June 2014. Wish me luck and I will try to keep you informed of the progress. 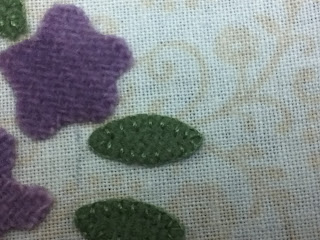